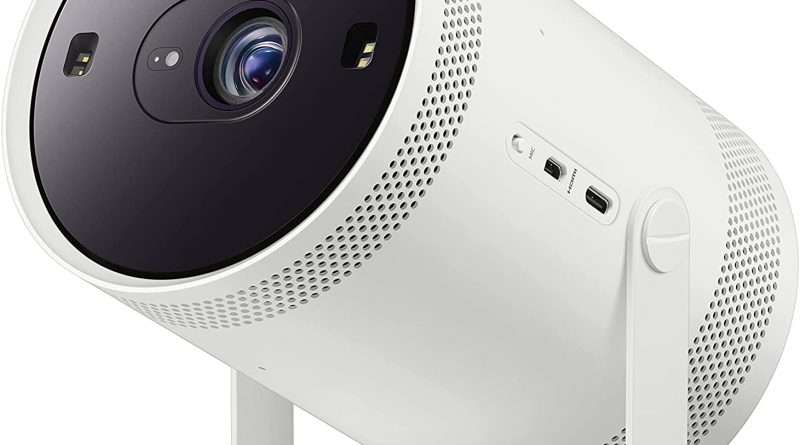 This futuristic device offers all of your favorite streaming services to keep you entertained for hours. It also has a powerful 360° speaker with smart assistant support that can answer any question! it also enables you to project what you are seeing on your screen to any screen using a Wi-Fi or mobile internet connection.

Samsung has taken on the challenge of making a quality projector that’s approachable to all audiences. Simply put, a projector which gets unpacked and ready to be used in only minutes is really hard to beat.

While the auto keystone feature functioned properly for the most part, there were some issues when it came to our screen’s surface. As a result of this, the image was skewed and required manual reshaping to be fixed.

Additionally, we weren’t too keen on Samsung’s updated smart TV platform and it makes its debut on The Freestyle before rolling out to the rest of the 2022 range. It was sluggish and forces us to leave our content when we need to perform something that isn’t supported by their app like watch a show or access our music files.

Overall, the Freestyle is a more user-friendly option than most projectors I have reviewed and it gives really good picture quality. It has excellent connectivity & as well as neat features which make it quite endearing.

The Samsung Freestyle is set to release in the UK on 16th February, meaning it will likely be all over the country before the month is out. If you have been waiting for the Freestyle to come out, it seems like it will be coming out in March of 2022. Retailers are already taking orders and it’s expected that deliveries will start happening on March 31st.

The Freestyle is a little pricier than other portable projectors on the market. It normally costs $899

Given that The Freestyle projector is more functional, offers more polish, and is cheaper than other 1080p HDR projectors out there, it has proven to be a great device for Samsung smart TV fans.

Samsung’s The Freestyle has a compact design and is easy to carry around. Just look at this thing! The Freestyle Smart Portable Projector can be picked up easily and fits into travel backpack with ease. It’s about the same weight as a can of dog food, at 0.8kg, and has a sleek design that is just 95.2x 171.4x 95.2mm.

This device has a strong aluminum stand which makes it easy to cast the projection on any surface – you can tilt it up to 180°.

The Freestyle can be used with a power outlet or from compatible power banks. They are especially suited for outdoor settings as they work with 50W/20V output.

The Freestyle’s 360° speaker delivers audio in every direction, giving you the utmost immersive listening experience. The touch capacitive controls let you power the device on or adjust the volume quickly and easily, right on top of the device.

In our recent review, Samsung was able to share with us their 92-inch roll-up projector screen so we were able to have the cinema feeling at home. (minus the risk of Covid, crying children and expensive snack prices)

The Freestyle’s auto-keystone feature was flawless in our testing and worked well in any instance where we pointed the projector at a wall or ceiling.

That said, we did find that the Freestyle had trouble registering the surface of our projector screen. Even with the projector pointed directly at The Freestyle from a central position, it always defaulted to a skewed image.

Despite the occasional difficulty setting up the Freestyle, I was very happy with this projector overall.

We’re not too happy with how slow the Freestyle is on the user interface. It acts as a debut of Samsung’s smart TV OS but we can’t say it took off well just yet.

To start, Samsung’s new TV OS is now full-screen. That means you can no longer change your settings while watching a show or movie. It also means that settings are partially hidden, requiring the use of additional steps to reach them.

While the new OS might be based on Tizen, it often takes over a second for button presses to register on screen. That makes navigating Netflix or changing streaming settings a bit of an annoyance.

It’s worth mentioning that the remote we received for review is not the one that people will be using with The Freestyle. Rather, it’s the standard remote that ships with Samsung TVs in its mid-range range. Despite this, we don’t think the remote has anything noticeably missing.

Issues like these go against the main selling point of Samsung’s “The Freestyle”, which is ease and convenience. But hopefully, issues with the device can be sorted out through an update to the firmware.

Although we have mentioned this before, it really stood out to us that The Freestyle was able to overcome the limitations of a 1080p maximum resolution and provide vividly vibrant images.

The Freestyle comes with 3 picture presets: Standard, Dynamic and Movie. In our testing, we found that the Dynamic mode brings about some motion smoothing and is best for watching sports events.

Our favorite feature was actually the “Movie” mode, which is much like the “Filmmaker Mode” on Samsung’s TV models. The picture quality with this model is excellent and very close to that of Hollywood.

Full disclosure, we turned off all the lights in our living room before we started watching this movie. But regardless of that, it was still awesome! The colors on the screen were extremely vibrant and accurate- I don’t know how Disney does it!

We ended up watching a dark and gritty movie called The Raid afterward. We were impressed how well the Freestyle handled the more muted material but also the aggressive motion and shaking camera that this movie has.

It’s worth mentioning that the Freestyle offers a Game mode with decreased latency. That’s great for casual gamers and gamers who want to play Mario Kart, but not well suited for players who are into more competitive games.

As expected with portable projectors, sharpness decreases a little the larger you go. Moving it further away from the surface or moving closer to it will see a drop in brightness, but images are still pretty crisp and visible even then.

In our opinion, the quality of The Freestyle’s image is more pleasant. The the wider it gets, the tighter its image projection becomes (and the closer you are to it), the easier it is to spot a sort of grid-like, dotted texture on the image – again, we imagine this is due to how the projector works.

This image isn’t as crisp as we would like to see but then again, in relation to lower resolutions, the Freestyle can provide a much more detailed output. Furthermore, most people will be viewing it from a distance and will not notice any difference.

When we first heard about The Freestyle’s built-in 360° speaker for the home cinema, we were a bit worried. After all, it would be the main source of sound in our living room! , Now that you know about Freestyle’s ability to output surround sound wirelessly, you can be sure that you’ll have a great audio experience no matter where you are.

Hi there! Just wanted to be clear – you won’t be able to get Dolby Atmos over Wi-Fi, but you will get much better multichannel sound. This will be great for anyone who really loves movies and sound like me!

Packing a setup process that’s over before you know it, the Samsung Freestyle projector is easy to get started with.

Samsung’s new device, The Freestyle, is bringing portable projectors into the mainstream. And I think it might be the thing to finally break through and make them a common household product.